Let’s take a look at the programme!

You cannot miss the programme we have planned for you for this year’s Conference! We will enjoy the company of renowned directors, post-producers, creatives, chefs, musicians… Who will help us acknowledge the value of the work of everyone working in the audiovisual industry.

Our journey in Valencia will start with the Regular General Assembly for the members of the Association that will take place on the 28th of September, in the Centre Cultural La Beneficència. The first call will be held at 4:30 pm, and the second call will happen at 5:00 pm.

During the Assembly the members will decide who will be the new president of the same.

After opening the doors of the Teatre Talia this 29th of September, the 10th Advertising Film Production Conference will begin at 11:00 am, with an inaugural act led by Johann Wald that will last until 11:15 am.

This same day, there will be more conferences in which will participate industry experts and professionals, who will talk about many different topics depending on each of their areas of expertise.

The first one will be ‘The importance of production in our industry’, where Juan García-Escudero, Chief Creative Officer of TBWA, will interview the renowned director James Rouse from 11:20 am to 12:05 pm.

From 12:05 pm to 12:50 pm we will enjoy the company of Asa Bailey (Director and Netflix’s Virtual Production Supervisor of ‘Virtual Production’) during the talk ‘The future of virtual production and real-time visual effects’. September of 2022 will mark the start of a new professional relationship between Bailey, On-Set Facilities and Ava., to promote and produce campaigns of the Virtual Production’s first-level environment in Spain for any type of content, television or films.

In order for this relationship to blossom, Asa will talk about the creative future in ’The future of virtual production and real-time visual effects’ and the VFX in the annual meeting and the APCP Awards Ceremony, that will be held in Valencia.

After this, from 12:55 pm to 1:35 pm, we will be attending the very appetising talk ‘Mise en place: kitchen pre-production versus audiovisual Pre-production’. The protagonists of the event will be Borja Beneyto ‘Matose’ (gastronomic journalist, member of the Real Academia Gastronómica and Co-Founder of Brandelicious) and María José Martínez (owner and Head Chef of Lienzo); and it will be moderated by Néstor Costafreda (Post-production Manager at HARRY). During this talk, we will discuss the similarities and differences between the gastronomic and the audiovisual production processes.

However, it does not end there! After this event, the APCP will move to the Museo de los Soldaditos de Plomo (Museum of Tin Soldiers) for the welcome cocktail, which will last from 1:40 pm until 3:30 pm.

From 4:00 pm to 4:40 pm, we will hold our customary round table focused on music, ‘Acknowledging the value of a successful phenomenon: recalling the Ruta del Bakalao’. The artists rekindling this time will be  Fran Lenaers (DJ) and Luis Costa (author of ‘¡Bacalao!: Historia oral de la música de baile en Valencia 1980-1995’ or ‘Bacalao! Oral history of dance music in Valencia 1980-1995’ in english), who will be interviewed by Coloma Fernández Armero, the CEO of OEO.

‘A conversation between…’, from 4:45 pm to 5:30 pm, will bring to an end the first day of conferences. During this, Mónica Moro (President of the Club de Creativos and Creative Director and foundress of ‘This is Libre’) will interview Lope Serrano, director of Canada.

To wrap up the day, the 5th APCP Awards Ceremony and its subsequent cocktail will be held in the Gothic Cloisters of the Centre del Carme (from 7:30 pm to 11:30 pm), and will be hosted by Topacio Fresh.

The 30th of September the Conference will start at 10:00 am with the round table of the APCP and the Club de Creativos, which will end at 11:00 am. During this, the ‘Truth Hurts II’ debate will take place, which will be moderated by Alejandro Falduti (Head Production at David Madrid) and in which professionals that will represent the producers and the creatives will take part. The producers will be represented by Ángel Recio (Executive Producer at Lee Films), Inés Segura (Executive Producer at  Primo) and Belén Gayán (Executive Producer and Co-founder of Agosto). Meanwhile, the creatives will be represented by David Caballero (Creative Director General at Wunderman Thompson), Bitan Franco (Chief Creative Officer and Founder of MONO Madrid) and María Cerdán (Creative Director en &Rosas).

From 11:05 am to 11:15 am, the Audiovisual Hub will give a talk about its latest updates, the spokesperson will be Luis Cueto (Advisory Member of the State Secretary’s Office of Telecommunications and Digital Infrastructures).

After this , from 11:15 pm to 11:30 pm Lucía Ongay will join us with a presentation about the Gerety Awards – Spain Jury, where we will learn about the Awards as well as this year’s winners.

The last talk of this year’s edition will be ‘Not even post-production would fix this’, which will last from 11:45 am until 12:25 pm and will be moderated by Mª Jesús Horcajuelo, Founder and Executive producer of Only 925, a production company that works passionately for big agencies and advertisers in Spain and has the ability to carry out any project no matter the size. The company also has an international presence thanks to its secondary brand, Teamworks.

You can also check the programme and the information about the activities by visiting our website. 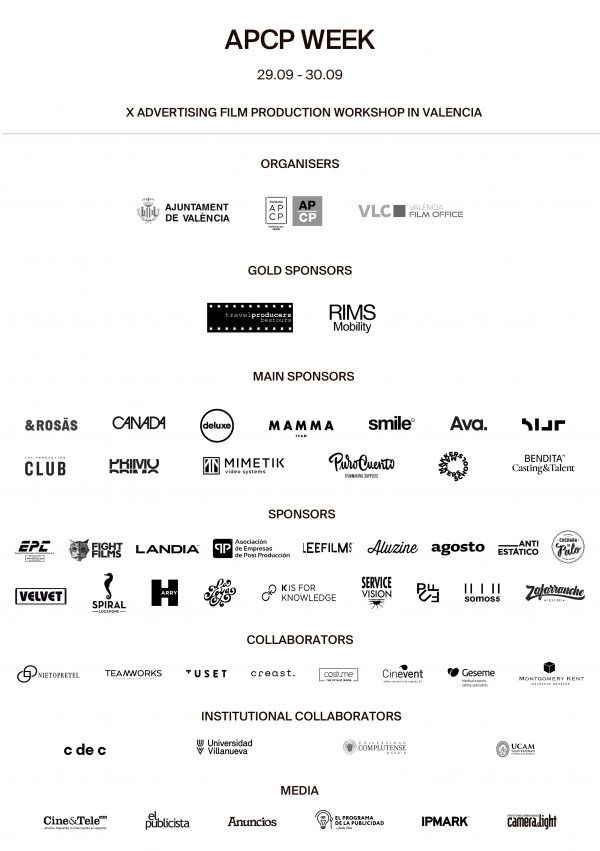